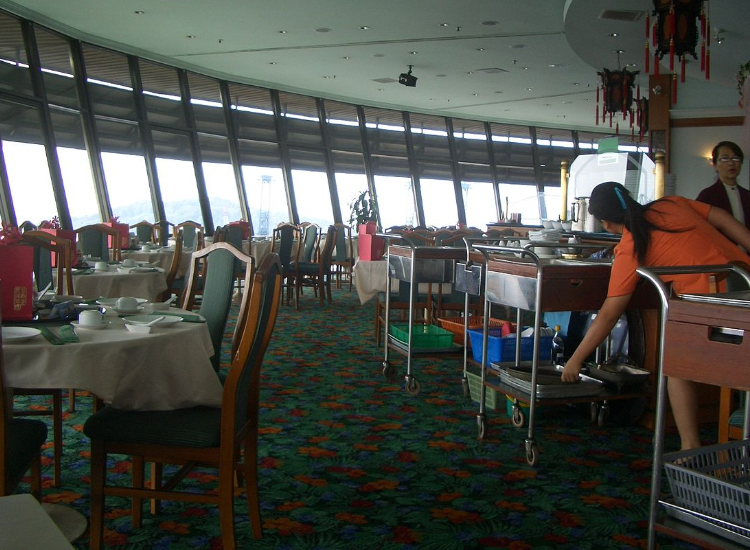 Who Collects Revolving Restaurants With Me

It started – but actually not yet – shortly after the Berlin Wall came down. We went on a family outing and decided to have coffee in the revolving restaurant on the Alex. Somewhere in our house – not on the server – there are photos of evidence, I know it for sure 😉Did we already have a digital camera back then? No idea. In any case, I remember exactly that from the height while the restaurant was rotating, the western and eastern parts of the city could (still) be clearly distinguished from each other every half hour, which is why I can at least approximate the timing from today’s perspective. However, I took the following photo when I visited Berlin in 2013. And as a non-Berliner, I can only say: I can no longer see any differences between East and West. I only know from Alex that where he stands was “East”. (And when I see “normal” signs on the Autobahn today, for example Magdeburg, I’m still happy that the unspeakable separation is history, but that doesn’t belong here.)

In 2005 I was traveling with our daughter in South Africa, more precisely in Kwa Zulu Natal. It was – I think – the most important trip of my life. We were very lucky to be able to take part in the inauguration of the church in Mooi River, which our son had built 2 years earlier as part of an encounter project ( Mooi River Thutuka project ). In South Africa, the time of separation, apart from , was still clearly noticeable. In many houses we were the first whites to cross the threshold and we were welcomed as friends. Many encounters and events are unforgettable for us. However: for our last evening in South Africa, our partners organized a farewell dinner in the Roma Revolving Restaurant in Durban! I no longer know whether it was the Roma Revolving itself, the community, the fantastic view of the harbor, the city and the Indian Ocean or whether I was simply blown away by the totality of the impressions or – old German-inspired. Anyway, I have every second of this evening in my Revolving Restaurant No. 2 enjoyed. (Ha! In 2005 we had a digital camera, but storage was so expensive! We only had one card and therefore we only have one proof photo. But I will not upload it because of the personal rights of those also shown here. The revolving restaurant collection competition is just fun!)

In the years that followed, I probably raved about our evening at Roma Revolving often and often, and that was the reason for No. 3. It was 2011: I was in the United States for the first time in my life. Our son was doing an internship in New York at the time and a rather loud voice in me had asked again and again: when, if not now? So I booked a ticket for my daughter and me and went to NYC to visit my brother and son (and Big Apple) for a week. Well, and when my children took me to The View for the eveningSurprised by the Marriott over Times Square, it was all about me: the passion “revolving restaurants” was finally awakened. I decided to visit all of the revolving restaurants in the world. So I mean as a goal. You can set goals if you are unlikely to be able to achieve them, right? Although … at that time there were no lists on the Internet. I found only individual pages of individual revolving restaurants on the net and assumed that there were maybe 10 to 20 revolving restaurants worldwide. It wasn’t that unrealistic. And one more thought … Kuala Lumpur appeared / seems unreachable to me. But who knows? In any case, there are now lists of revolving restaurants (here the English wiki list) and I now know that I will not be able to visit everyone in this life. But don’t worry. Then as many as possible and always one more than you 😉

Want more RRs? My husband travels a lot professionally, to Dubai for two weeks in May 2013. I was unsure if and how and where I would be able to move there alone during the day (and I didn’t want to wait in the hotel room for days), but it came to pass that the long weekend around May 1st was in half of its time so I flew to visit him for a long weekend. Since I was now infected, I searched specifically and lo and behold: in Dubai, there is the Al Dawaar above the Hyatt Regency, It was a wonderful evening high above the city. The buffet was first class – there was really everything: classic Arabic cuisine and spare ribs, fish and salads, a plethora of different desserts (see photo: with gold leaf!) And, and, and. The food was also affordable, the interior very elegant and the service more than friendly. Only alcohol is expensive. If you don’t want to do without the bottle of wine with your meal, you have to calculate 100 euros for the cheapest bottle.

We started talking to the friendly waiter and I told them about my plan for the revolving restaurants. Oh, he says, there’s one in Abu Dhabi too. Hmmm … somehow I couldn’t persuade my husband to drive with me through the desert to Abu Dhabi the next evening (we still had one). It’s not far at all: just 150 km one way. Männo! Well, the next, last, evening in Dubai was also spectacular with Fountains and Burj Khalifa and – luckily, mine – the order came from Abu Dhabi last December. Sure, I ordered a table right away, right?

The revolving restaurant in Abu Dhabi is called Tiara and turns over the Marina Mall. There is no alcohol here, so you don’t even get tempted 😉 The kitchen in the Tiara is European “normal”. And the interior was not really stunning either, but it doesn’t matter: the view over the Persian Gulf and the city is, of course, gigantic and I had my No. 5 * happy.

A “Revolving Restaurant” in Zwolle and Art in Apeldoorn

Restaurant That is Perfect for Company Meetings

For The Restaurateurs: The Economics & Convenience of Quality Cheese Sauce