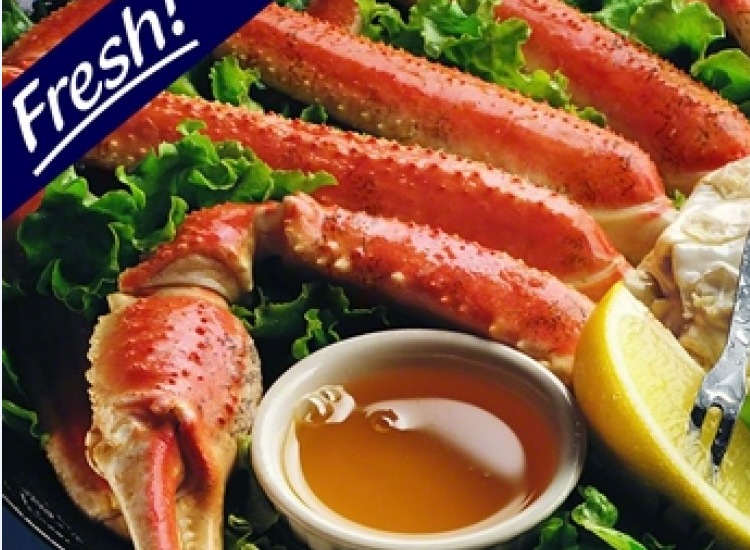 The Choice of Fresh Snow Crab

We received our first shipment of fresh snow crab (opilio) in from Trident’s Saint Paul plant today. With Valentine’s Day this weekend, coordinating this fresh shipment was a bit of a “nail-biter” for me.

There is only one freight plane leaving the island on Wednesdays- so I’m always worried about bad weather. Last year the Bering Sea ice pack expanded south and engulfed the island. Crab boats could not deliver for several weeks- which put a real damper on or fresh snow crab program.

I just went back to the cooler and sampled a leg; it’s excellent! My friends out at Trident are taking care of me. The crab is unusually large for opilio:) My wife Katy and I are going to a dinner party tonight, so I will bring 10 pounds or so. To my knowledge, there is no other company dealing in fresh snow crab right now.

It’s kind of a neat thought to realize that the only fresh crab out there right now happens to be sitting in our cooler. I need to try to figure out a way to get the word out about this wonderful product. Once people try it fresh, they are usually remiss to go back to frozen.

Our business is in a great position to grow with this trend, as fresh Alaska crab is sure to grow in popularity. In October ‘07 I took a crab-buying trip to the Trident Seafoods processing facility on Saint Paul Island. It is the world’s largest crab production facility.

The efficiency of the plant was amazing, and I took a lot of pictures. I wanted to show our customers how the fresh (& frozen) king crab we offer is processed. If you’re curious, join me on a king crab processing tour.

On a separate note, I had extra time while on the island, so I walked down to the beach and was able to take some pretty good pictures of fur seal pups. Pretty adorable little things. King crab season opened on October 15th. Technically, there are several king crab seasons here in Alaska, but “Bristol Bay” is the big one.

The target species is red king crab, which is regarded among connoisseurs as the best of the 3 commercially-harvested species in Alaska. The quota for 2008 is a healthy 20,354,000 pounds. Fewer than 100 boats are fishing for this quota this year, and the first deliveries are expected within 3 or 4 days of the season’s opening.

Buyers in Japan are showing strong demand for Alaskan king crab, and I predict that the majority of Alaska’s 2008 quota will be exported. I am flying in a shipment of the season’s very first fresh-frozen Alaskan red king crab from Trident’s Saint Paul Island plant, on the Bering Sea.

I am coordinating multiple shipments of fresh (never-frozen) king crab over the next few weeks. I am proud of the fact that FishEx brings the first crab to market- ahead of our competition. The way things usually work in Alaska is that crab is processed at a number of plants on the Bering Sea.

The majority of the quota is frozen, and after several weeks of accumulation, the bulk-frozen crab (in whole clusters) is shipped to Seattle, where it is checked-into various cold storage companies. After that, it is pulled-out and processed into cut “legs & claws” for distribution throughout the United States.

The whole process generally takes several weeks. At FishEx, we shortcut this process by flying in our first shipment directly from the plant, and usually have crab “on the ground” in Anchorage only days after the season opens, and weeks ahead of our competition.

Buying Tip: Ask your local fishmonger when the king crab he/ she is selling was caught. You may receive an answer like “Oh, it’s from this season’s catch.” This should make you suspicious. Alaska’s main king crab season runs between October 15, 2008, and January 15th, 2009.

Both fresh, and a new season’s fresh-frozen king crab are notably superior to the crab that has been in cold storage for a year or more. Whenever I inspect a case of crab, the first thing I do is to lean in close and inhale deeply. New crab has a distinct, sweet “crabby” smell that contrasts sharply with the “briny” smell of older crab.

The Winter Party Drinks With Alcohol